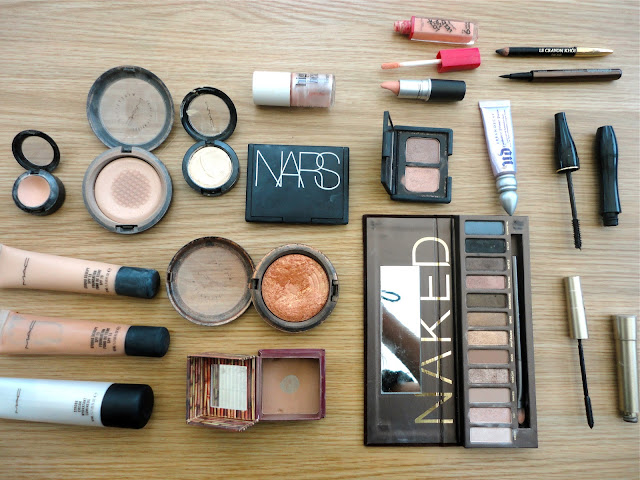 WARNING!!! Your going to need to prepare yourselves this may be quite an extensive write up. I didn't want to just tell you what I use but why as well... I see why make up reviews work so well on youtube as its hard to make them concise. But there is no way this mug will be on youtube any time soon soo this will have to do!

My everyday make up is an odd one as it is primarily dictated by my budget. Pre-uni, when I had a job I wouldn't think twice about buying some ridiculously priced foundation/mascara/lipgloss as I didn't go out half as much and didn't have to pay for stuff like food. However, from September when I entered  the world of the skint student my make-up budget has been cut dramatically. So what you see here is sort of what I wear now however I will throw in what I do prefer to buy when I have the money.

For me I tend to find something I love and just use it everyday, I don’t like going too far out my comfort zone make up wise purely because make up is so expensive and if I were to buy a 30 pound foundation and not used it I would be hating my life.

First off is what I wear as base make up... 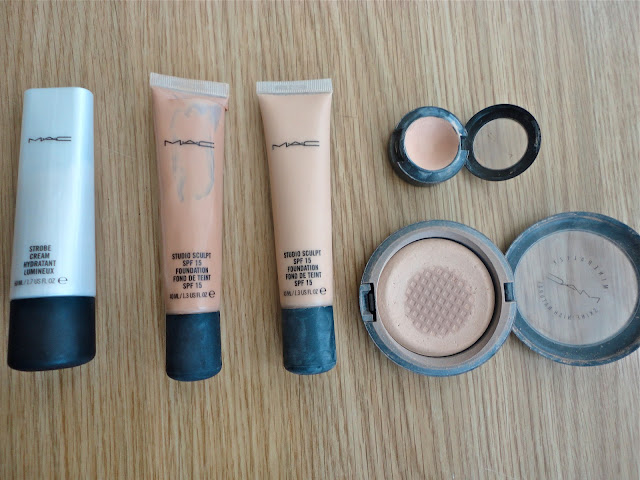 Strobe cream is my not so secret weapon to make my dull skin look slightly more radient. It gives a dewy, youthful finish on the skin when mixed with foundation. What I love about it is it doesn't make your face look like a disco ball but adds a pearly, iridescence.

I have normal erring on dry skin and I find it really hard to find a foundation which gives me a sort of dewy glow as often foundation just clings to my dry areas and I look like a cakey mess. MAC's Studio Sculpt Foundation gives a dewy finish that doesn't cling in any way to my dry areas, that combined with the fact it’s extremely full coverage means it’s perfect for me. At £23 pounds its not cheap, however its so thick I do find you only need a small amount whereas with drugstore foundations such as Max Factor I literally go through 1 a month so it actually works out cheaper for me. I still can't bring myself to spend £30 on say NARS or Chanel purely because I do not have that sort of money however would love to try them so maybe for a birthday pressie! I also always have two foundations one in my natural pale shade NW15 and one in my tanned colour NW35 which I mix together to achieve the varying colours I go when I'm fake tanning.

Concealer wise, I have got to go with Collection 2000 (not pictured here) for under-eye dark circles, its a total bargin and I feel because it’s very light and very much a fluid it doesn't cling unflatteringly under my eyes. This brings me on to my other concealer I use more for spots and random breakouts, Studio Fix Concealer by MAC which is AMAZING for covering spots however under-eye I swear it makes me look like I have random creases and at 18 that is not the one.

Powder again is MAC, it is their Mineralise Skinfinish Natural in medium, it provides me with coverage, doesn't look cakey and prevents shine on my forehead. What makes it better is how long it last, this bad boy was bought in July 2011 and is only just about to run out. Thats my argument when it comes to spending money on higher end brands as they just last so much longer than their drug store equivalent. 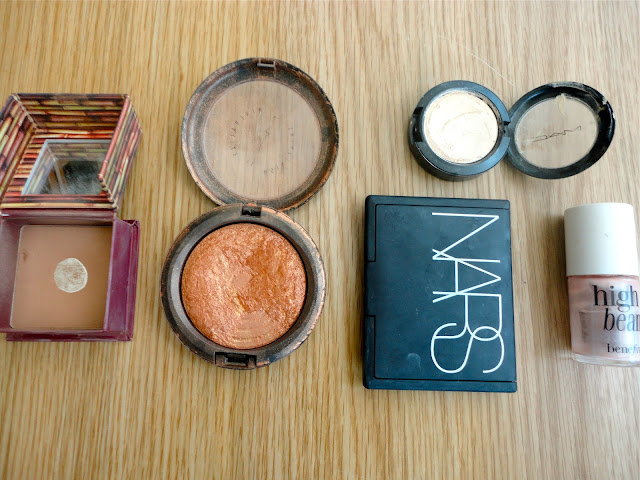 As a tan addict where blush fails, bronzer wins. When I had money it was NARS Laguna (It has run out so only the packaging is pictured) every time but I wear that much of the stuff that it goes, I kid you not, within 4-6 weeks which is SHOCKING considering I spent a good 24 quid of the thing. But it’s an addiction, it’s the perfect brown that can be built up when wearing fake tan yet a subtle sweeping looks just as good when I'm embracing the pale side. However realistically I can't afford it anymore so I always always have a Benefit Hoola on standby for when my beloved Laguna runs out. This stuff, unlike laguna, lasts so long: I’m talking over a year which is brilliant for a tanorexic like myself. However I do find it has a slight grey look to it, and when a lot has been applied I think it can tend to look grubby whereas Laguna is a true brown. For an added bit of shimmer when using Hoola I use MAC's Gold Deposit Mineralize Skinfinish.

Blusher is a rare occurrence for me, but I’d say it's generally a toss up between MAC Peachykeen and NARS Orgasm.

Highlight has got to be Benefit Highbeam, subtle but makes such a difference to my face. I had a brief fling with NARS Albatross but gave it to a friend as it’s a powder and just looked a bit cakey. MAC Pearl Cream Base is also worth a whirl but it doesn't last, however for an instant effect it is gorgeous and gives a beautiful dewy look.

Finally onto my eyes and lips ... 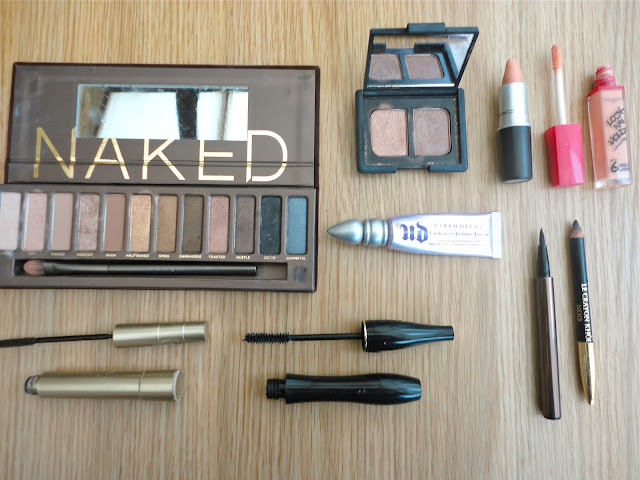 Mascara is dictated by my budget as well. I have the shortest stubbiest eyelashes in the world, literally practically non existant. So for me finding a decent mascara has been a life long dream. My favourite is Lancome Hypnose however at 20 quid a pop I physically can’t bring myself to buy it on a student budget especially as it dries up extremely quickly however I do think it is amazing. So a more student friendly option is L'oreal Telescopic, which I do actually really like and at about half the price of Hypnose I do think you get not that far off the quality so it’s a winner.

Eyeliner rarely features heavily in my everyday make up, but I do like MAC Smoulder but it does end up quite far down my face by the end of the day but the intensity of the colour is brilliant. So I recently have tried Lancome Black Khol Liner which is a much harder consistency but it's great during the day as it doesn't budge. I do love Bobbi Brown gel eyeliner as it lasts all day however I find it a bit of a faff as I have to use a brush like the MAC 208. So recently I bought this gorgeous eyeliner pen and it is honestly so long wearing and easy to use. It’s by a brand exclusive to Liberty called Hourglass and the quality of their products is amazing, I have their eyeshadows which I wear in the evening and the pigmentation is stunning.

For the day I like to keep it simple in terms of eyeshadow, if I’m looking for a more taupey look I try either one of the colours from my NARS Kalahari duo or MAC’s satin taupe. If I’m looking for a brown or gold I head straight to my Naked palette. I actually have had 2 naked palettes in my time, I lost one on a very drunken night out (do not ask me WHY I felt the need to take out a whole eye shadow palette but apparently in my drunken state I thought it was a genius idea and anyway I ended up dropping my bag and said goodbye to my naked palette... soul destroying). Anyway it’s a testament to the Urban Decay Naked Palette that I decided to shell out another *gulp* £36 quid on a new one however when we put it in terms of MAC, the 12 shades in the palette would come to well over £120 so value for money is great!

Eyeshadow base has got to be Urban Decay primer potion, it prevents creases and makes my eyeshadow last all day and the colour pop. I did used to love MAC’s Paintpots however they dry out far to quickly for my liking.

I'm all about the nude lip. Myth by MAC is always my number one nude however when I inevitably loose it on a night out GOSH do a very similar shade which I do love. Teamed with MAC Florabundance however Collection 2000 do a killer lipgloss for £2.99 in their Lock N Hold range. It gives a similar look, just doesn't last as long but when I loose on average one a week it makes the pain of loosing it much less.
So there we have it my favourite everyday make up!